Another way to do it

It takes courage and self-belief to list on the JSE in budget week. But the Core Shares Global Dividend Aristocrats is no “me- too” fund. This exchange-traded fund (ETF) gives investors and their advisers the chance to take a different approach from the standard MSCI world Index. Or if they haven’t yet bought an international ETF. it is a good start. The fund is highly diversified among blue chips. And it has a reputable parentage. as it tracks the S&P Global Dividend Aristocrats Blend Index series, which has gathered 11300bn of assets. The new fund focuses on cash cow companies, which sounds like an insult
and it is one if you think that investing is all about hot technology shares yet to turn a profit.

To qualify as a Dividend Aristocrats share in the US. a company needs to have paid an increasing dividend every year for 25 years. These shares have had to produce consistent earnings to do this, and they are also disciplined in choosing growth projects. Weighting is towards less cyclical sectors. notably consumer staples. and it is heavily underweight in IT and financials. It is overweight in health care, industrial and real estate.

Aristocrats shares are also known for financial strength and low debt levels. Names include McDonald’s, Thomson Reuters. Royal Bank of Canada. Coca-Cola and Johnson & Johnson. There are 275 shares in the index. Dividend Aristocrats has beaten the traditional cap-weighted MSCI world Index over the past 10 years. with a 15.9% return compared with 11.4% from the MSC!. Even if this streak doesn’t continue, it is worth at least blending with your traditional holdings in what’s called a core satellite approach. These shares can be highly defensive as they enjoy bull markets more than they suffer from bear markets. On a rolling five-year basis. Dividend Aristocrats has had no negative periods. against 17.5% for the MSC!. And the new fund gives a yield of 2.7% — not had for a global asset Fees could always be lower, but the total expense ratio of 0.6% is among the least rapacious.

Actuaries have almost become cool. following the huge success of Discovery’s Adrian Gore and Sygnia’s Magda Wierzycka. Well. almost — there are still those who need help to earn a crust. I was intrigued to see a new business has been created called Virtual Actuary. It made me think of the holographic doctor in Star Trek Voyager. To adapt his catch phrase, you would expect to hear “please state the nature
of your statistical emergency”.

Spokesman Adi Kaimowitz insists he is not the boss, just providing operational support for the real workers. He says he would love to see images of actuaries parachuted, as it were. Into the client’s offices. But until the technology is refined. the actuaries for hire will work from home. Kaimowitz is particularly proud that “mummy actuaries” (his phrase) who made that choice have been able, at their own pace, to continue to contribute to valuation and longevity studies while remaining at home. Virtual Actuary operates from seven hubs around the country. Kaimowitz says that because it doesn’t have the
overheads or the demanding shareholders of the established actuarial firms its charges will be highly competitive.

Though he doesn’t say so. it Is the Uber of actuaries. Virtual Actuary has minimal overheads. It allows clients to use actuarial services for an hour or 10. Whatever suits therm. The actuaries in the network, like Uber drivers, are effectively self-employed, using the Virtual Actuary website for referrals. 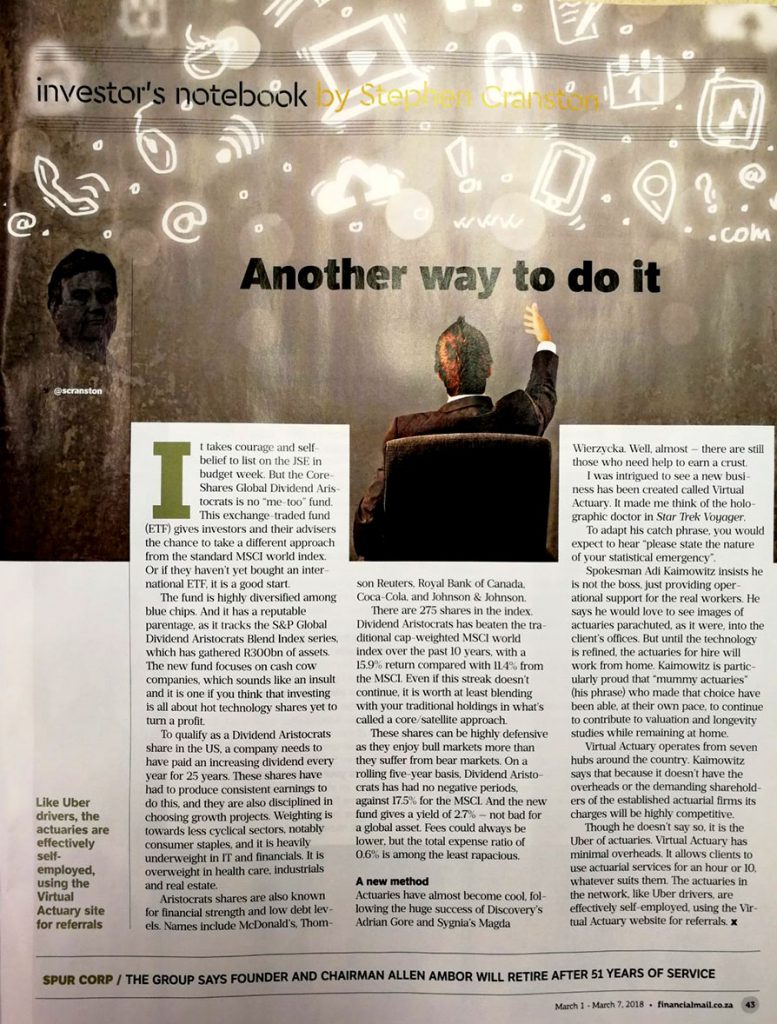